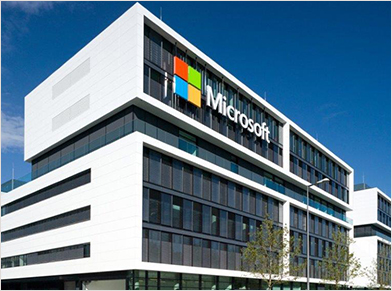 Munich is home to Microsoft’s new headquarters in Germany. The design has been done by Munich based architectural office, GSP Architekten who then extended the design the entire facade’s construction to HAGA Metallbau GmbH. HasenkopfIndustrieManufaktur was commissioned by the latter to manufacture and deliver the Corian elements, using which the modern and transparent corporate headquarters have come to life. The challenge was to cover the 5100 square metres of facade with 2290 individual Corian parts which were delivered accurately matching for angular elements, L-shaped parts and U-shaped cups. The facade design consists of a staggered structure with numerous plant-covered terraces and courtyards bathed in natural light. The exterior has its white facade made of Corian. Thanks to the flexible, three-dimensionally adjustable substructure developed by HAGA, the pre-fabricated Corian® panels were installed with the utmost precision. “The most important criteria for choosing Corian® for the building envelope was the smooth, homogeneous external image we were able to achieve. The look is especially fascinating when illuminated by the sun,” explains Ingo Schäfer from GSP Architekten. “As an additional advantage, the smooth, non-porous Corian® surface has a self-cleaning effect. Therefore, dirt will not adhere to the facade.”