Green building engineers are using microalgae to heat or cool an apartment complex in the German commercial hub of Hamburg as part of an innovative experiment in the use of bio-energy in urban areas. The new apartment complex, called the Bio Intelligence Quotient (BIQ) house, is currently under development. It was one of 16 projects participated in Hamburg’s 2013 International Building Exhibition. According to its developers, it will be the first building in the world to be fitted with a bioreactor on its façade. On the BIQ’s two south-facing walls, 200 square metres will be covered with integrated photo bioreactors – transparent shells containing vast colonies of the microalgae which are nourished using liquid nutrients, natural sunlight and carbon dioxide. The bioreactors generate biomass which can be harvested to generate power while at the same time providing dynamic shading, thermal insulation and noise reduction. In addition to reducing utility bills for heating in the cool northern city of Hamburg, the microalgae will consume carbon dioxide, reducing the building’s greenhouse emissions. The developers say this will render the building completely carbon neutral. 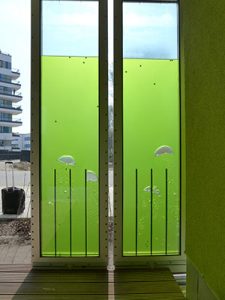 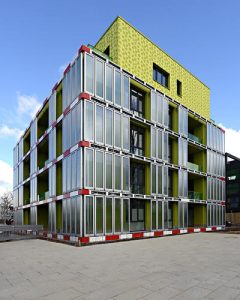