The WAN Product Innovation Award, now in its sixth year, attracted entries from all over the world. Petersen Cover is a new building product that bestows a distinctive and modern look, whilst retaining all the familiar advantages of traditional brick, won the award for Materials – Façade Category. Due to the structure of the handmade brick, façades and roofs look beautiful, rustic and exclusive when covered with the new product. Judging the entries in this category were Andrew Best, Partner at Buro Happold Brendon Moss, Director at Qatari Diar and Sarah Williams, Principal & Founder at S Williams Architects. It was tough for judges to choose the best out of the variety of products entered into Material – Façade sub-category – ranging from LED Façade technology to Light Redirecting Insulation Glass. 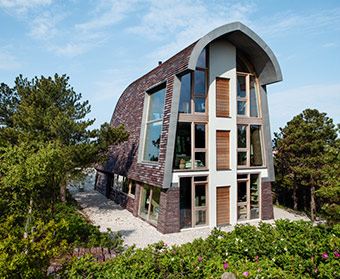 Petersen Cover is a further development of Kolumba, which was developed in cooperation with Peter Zumthor (a Swiss architect and winner of the 2009 Pritzker Prize and 2013 RIBA Royal Gold Medal), and also produced by Petersen Tegl (a Danish brickworks that manufactures and sells bricks and clinkers that are renowned for quality and excellent craftsmanship). Petersen Cover is 100 per cent handmade in wooden moulds. It is composed of various combinations of English and German clay and fired at very high temperatures.

Installation of Petersen Cover is low technology and refers to traditional laying of pan tiles. The bricks are attached to a frame, which ensures precision both on the surface and around the corners of the building. They cannot be blown off or removed by hand – the solution is vandal-proof. Installation is quick, simple and not dependent on the weather. Petersen Cover is recyclable, which makes it a highly sustainable product. With the right tool, it is easy to remove the bricks without breaking them, so they can be used over and over again. Traditional brickwork requires no maintenance – except for the joints, which need to be checked after a certain number of years. Petersen Cover, however, has no joints, and is 100 per cent maintenance-free. A façade of Petersen Cover has none of the expansion joints that sometimes disfigure a brick façade. Façades with Petersen Cover are water-resistant and absorb a minimum of moisture. Petersen Cover was developed as a prototype by Min2 Architects for their own home in Bergen aan Zee, Holland.

FibreC 3D by Rieder Smart Elements GmbH was another winner in the façade sub-category. FibreC 3D, from Austrian manufacturer Rieder, enables architects and builders to use three-dimensional freeform elements on façades with complex geometries. The three-dimensional mould made of glass fibre-reinforced concrete makes façades with ambitious geometric forms possible.

Buy Aluminium Window Friction Hinges online at best prices at McCoy Mart. Choose from our wide varieties of Door and Window hinges such as Butt Hinges, Bearing Hinges and more.