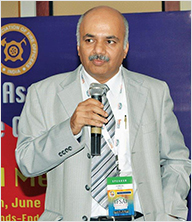 Facade design has improved greatly in the recent past. However, facade design alone does not cater for active fire protection. Appropriate testing of facade materials and the fire stopping systems are critical to ensure adequate performance of the façade system of the buildings in case of a fire. What are the parameters that define the performance of Aluminium Composite Panel (ACP) during a fire, and various aspects which could prevent the spread of fire in the building such as perimeter fire stopping and compartmentalization of the structure?

Lack of awareness of basic fire and safety aspects amongst citizens is an important factor, points out Santosh Warick, Director, Maharashtra Fire Services. Rapid urbanisation and industrialisation has created a challenge of fire and safety of high-rise buildings. One of the major causes of urban fires is the negligence of occupants toward fire safety norms and over-loading of electrical systems in buildings.

Façade materials play a key role in fire safety, as it would be extremely difficult to control the building fire on the exterior. Hence, more focus is needed in selecting appropriate materials, and this requires designer knowledge on material behaviour and performance. 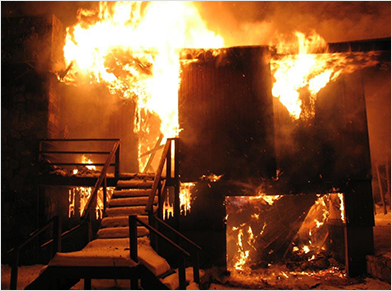 Fire from lower storey can propagate to higher storeys through the external cladding material. This, we saw it in the recent incident of Grenfell Tower fire in London. The London tower devastated by a vicious building fire may have been installed with flammable cladding during a recent renovation. Many reports say that cladding with aluminium composite material (ACM) rainscreen at Grenfell Tower instilled the spread of fire. A large number of tower fires in United Arab Emirates, South Korea and the United States are linked to the aluminium panels with polyethylene core in the facade. Such materials used for external cladding should have been tested for its combustibility. Of late, many high-rise buildings in metros have started insisting on fire retardant materials

Façade Materials and Their Reaction to Fire

The majority of human loss in case of a fire accident in a building is due to smoke and toxicity as a result of the fire. ‘Reaction-to-fire’ of façade materials is very important to contain the propagation of fire and to carry out rescue operations. Combustibility, ignitability, flame spread and burning droplets are the important parameters to consider while addressing fire propagation aspects. However, smoke development and toxicity are the key parameters for the safety of occupants and for rescue operations by the fire brigade.

The parameters which define performance of a fire retardant cladding solution are :

It is very important to understand the difference between ‘Fire Resistance’ and ‘Reaction-to-Fire’. Even a normal paper is fire rated, but up to what level? Will this be acceptable? The answer is NO.

‘Reaction-to-Fire’ is more relevant to materials. It deals with combustibility, ignitability, flame spread, smoke development, burning droplets & toxicity. Since we are discussing about ACP, which is façade material, ‘Reaction-to- Fire’ is an appropriate term for selection of aluminium wall cladding and not fire resistance. Fire resistance deals with compartmentalization abilities of building systems like walls, doors, ceiling etc.

Understanding the Performance Criteria of ACP with various test methodologies :

Therefore, an ideal fire retardant ACP must pass EN 13501-1 along with either NFPA 285 or BS 8414-1. Apart from the above, ACP with non-combustible core (mineral filler of more than 90%) is also available which can be considered for very tall buildings / places with very high human density. This product conforms to A2 as per EN 1305-1.

In either of the above-mentioned ACP, a third party certification like ‘Class 1A’ from an agency of repute for the manufacturer of ACP would provide required assurance. Certification process of ‘Class 1A’ is:

It is advisable to use Aluminium cladding without sealants.

Perimeter fire stopping is one of key requirements, which will prevent fire/smoke spreading vertically from one floor to another floor in case of façades are continuous between floors. The overall integrity of the façade system at the floor level is critical to achieve fire resistance. Spreading of fire on tall buildings is controlled at the building envelope level. There are proven and time-tested details as per best practices to be followed by use of appropriate interfacing materials. Any compromise on materials, specification, detailing at this interface would have an adverse impact on fire performances.