Railings – What can go wrong and how to do it right

The Telegraph, July 4th 2013 – A laborer died and a 62-year-old woman was injured when a first-floor balcony of a Burrabazar building collapsed and fell on the road at 9.15am on Wednesday. –

TOI, August 21’2012–“Aunty, Poorvaj fell down”, screamed five-year-old SatyaKaushik from the balcony of his third floor apartment when his baby friend slipped through the railing while they were playing in the balcony. Police suspect that the child might have fell after getting through the balcony railings. The horizontal railings had ample space for a child to slip through, they said

Jan 8, 2011 – Prajit Banerjee was so engrossed in a telephone conversation that he tripped over his seventh floor apartment’s balcony railings and fell to his death on Bannerghatta Road. He was waiting for prospective buyers for his home when the accident happened.

April 11, 2011 – Nayana Manoj (1) was playing with a cup and pen, when the cup went diving down the balcony. The little girl peeped through the gap between the railings of the balcony of her second-floor home in Srinivasa Nagar, keeled over, hit the ground and died.

April 28, 2011 – Shalini M, 16, fell from the terrace of a two-storey building opposite her house and died. She was playing with her friends when the accident happened.

July 25, 2011 : Eighteen-month-old Arman Kashyap died after he wriggled out of his mother’s arms while she was feeding him near the open window of the passage in their house on the 9th floor of Adarsh Rhythm in JP Nagar. The toddler hit the roof of the porch below and was killed.

Aug 2, 2011 : A two-year-old boy fell from the 3rd floor of his house at Shamanna Garden, Byatarayanapura. Mohammed Noor had climbed up to the 3rd floor through a grill gate on the 2nd floor. He was trying to climb on to the parapet wall when he slipped and fell.

September 24, 2011 Two-year-old Vandana C succumbed to her injuries after she fell from the balcony of her house in Vijayanagar. She was playing near the balcony railings and fell while collecting her toys.

One thing common about all the headlines above is they scream “PREVENTABLE”. They all often start with ‘balcony collapses’ and end with ‘injured/killed/hurt’

All these extremely tragic stories reinforce the common belief that in India cost of life is so less and is compromised for almost anything. 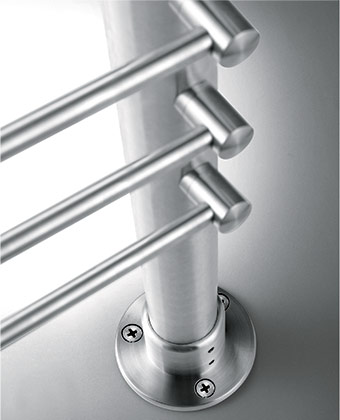 Railings are a first and most visible element of a building that has balconies. they offer the builder an opportunity for creativity. They can be made of many materials, formed to different shapes and connected in many ways.They make an instant design statement for all to see and admire from a distance and up close. Almost every new home built today includes protruded deck or balcony and the railings establish the style and limits of these design spaces. Railings are not necessarily the part of all the balconies and decks but where there are, it’s extremely important that they adhere to certain codes and as far as their design and structure is concerned. But it’s highly unfortunate and callous on part of the concerned authorities that such news is commonplace. Railings have just become a piece of decoration fulfilling the aesthetic hunger of the architects and building owners and ignoring the basic fundamentals of security.

Handrails must be designed using precise, project-specific calculations that take into account use, loading, physical material properties and many other safety factors.

The strongest and simplest railings are those with horizontal parts secured by bolts or screws to the outside faces of the posts. For a cleaner, more streamlined railing, the horizontals would be placed between the posts. Railings should coordinate with the architectural style of the home in some way. This can be done in terms of materials used, detailing and connections. It is important to check with local building code bylaws to clearly determine the requirements in terms of railing height, material types, distances between support posts and distances between balusters.

Let’s take a cursory glance on what the codes in India have to say on the balcony railings: 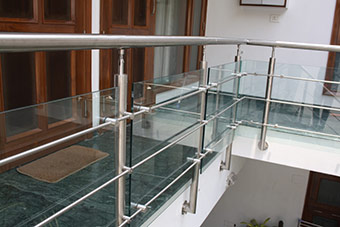 Therefore, we notice there are various mandatory codes in place ensuring the safety of the balconies and railing. But in most cases the developers ignore it and in place of a properly designed and constructed railing, place a few metal rods to make it look attractive. Some do so to cut the costs.

Guardrails and handrails are critical safety features in almost every building over one story high, from hotels and condominiums to industrial and commercial facilities. High precision manufacturing and installation of the same is necessary to ensure safety and avoid accidents.