Lingel Windows – A company that sells relationships & not merely windows

Lingel, a German-based veteran is one of the leading manufacturers of high-quality Doors and Windows in Europe. Notwithstanding its global repute for uPVC Doors and Windows, the road wasn’t a cakewalk for Germany-based Lingel when it set foot in India, back in 2006. With a skeletal workforce and little experience in the nascent Indian market, Lingel Windows began its voyage into unchartered waters.

As they say “A leader is one who knows the way, goes the way, and shows the way”, this is exactly what happened when Mario Schmidt took charge of the Indian operations a little over eight years ago. Mario was assisted by an equally able team that formed the backbone of Lingel’s growth by leaps and bounds over the years. Since 2006, they have opened sales offices in almost every location in the country. In the North, they have a huge hold in Gurgaon, Delhi, Noida, Chandigarh, Ludhiana, and Jammu. In central India, it is Lucknow, Ahmedabad, Raipur, Nagpur, Pune, and Mumbai. Moving southwards, they are actively involved in selling UPVC windows in Bangalore, Goa, Kochi, Hyderabad, and Chennai. Their presence has been stretched to North-east India including Kolkata, Siliguri, Guwahati, and Shillong.

In India, Lingel is the only German-based maker of uPVC Windows and Doors. They use profiles in collaboration with the German company Dimex which designs special profiles customized for the Indian environment, and in tune with the consumer needs of the country. 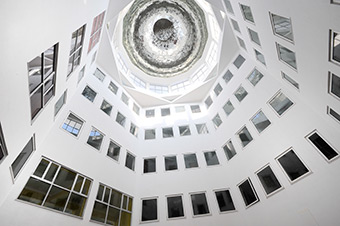 TREAT TO THE EYES – PRIME PROJECTS

Amongst some fantastic implementations, here are some projects which have earned Lingel a respectable amount of deep trust and satisfaction among their customers!

An awesomely structured Villa in Chattarpur, New Delhi, spread in a magnanimous area of 50 acres (Fig – 1) required resistance over termites. Being on the metro line, the noise was a major concern. Lingel added to the beauty of the villas by providing Fixed Windows to match the ambience. Hence, the well designed uPVC Windows also overcame the threat of termites and noise.

Another set of premium villas in Chennai by the famous Chaitanya Builders, proposed the requirement of a special style of Windows to match their name and statement. To serve the purpose, a niche European Window, Lift-and-Slide was imported by Lingel. It has a special sealing and it can be made air tight, superseding the myth of a Lift-and-Slide Window which cannot be made air tight.

Pali Temple is one of the promising facades of Rajasthan, and Lingel has supplied Windows to the beautiful structure. It is a temple built for foreigners (Germans) who have absorbed themselves to worship Lord Shiva. Another interesting feature of this dome-shaped structure is that it has a shape of “OM” when observed from above. The major requirement of this facade was no inculcation of noise not even 0.1% as it involved meditation. Lingel provided the sacred temple with 90% uPVC Tilt-and-Turn Windows which allows perfect ventilation and paves way for a noise-free environment.

Apart from a bulk supply, Lingel has been instrumental in maintaining a liaison with its major individual customers – Mr Manglani is one of them. He is the owner of Meena Bazaar, West End, New Delhi. He demanded a special finish in the Windows of his house. To match the furniture of his house, Mahogani texture wooden finish Windows were made available by Lingel. These Windows had 50% openable parts which allowed maximum ventilation and at the same time fresh air to come in. Lingel offers a wide range of colours, textures and finishes in Windows depending on the requirement of the customer. They also provide lifelong safety services.

Bangala Sahab Gurudwara, Pratapganj New Delhi is one of the other landmark structures where Windows have been successfully installed by Lingel. The langar hall is an eco-friendly monument with no parapet. Because of the need to allow water and other entrants, Lingel provided openable Windows of 8 feet in width with 2 shutters. 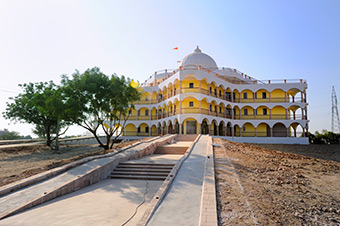 Puri Constructions in Faridabad is responsible for choosing premium products for building high profile villas. They take a keen interest in selecting each and everything right from chandeliers to every colour to every minute detail. Since Lingel also aims at delivering the best quality products to their customers; the association with Puri Constructions has come a long way. So for serving standards, special wooden finished Windows were provided that eventually formed the key attraction point.

Jindal Steel is coming up with their Educational University in Sonipat. Their association with Lingel continues to grow since 2008. Lingel has been responsible for providing Windows to the entire organisation and now they are venturing into their University which would be launched soon. For maximum ventilation, the concept of only Sliding Windows was been made available in the University.

Ashok Khanna, the head of the CNS group builds a new house every year and makes Lingel responsible for the Windows of his house. He has been a premium customer since 2006.

Grand Hotel, Great Lakes Institute in South India, Bangalore Sterling, Sun city ABW and Central Park are some of its popular projects of Lingel. Lingel offers special and unique Window Systems with regular/ different textures and finishes to match the varied requirements of their customers. They offer Casement, Fixed, Lift-and-Slide, Sliding, Tilt-and-Turn, upvc sliding window now trending French Windows and European Bars. These options have been tried and tested at Lingel and they continue to satisfy their customers.

Lingel has not only made a name for it today but has also earned deep respect in the Indian community. “But Lingel’s success in India so far is only the tip of the iceberg”, asserted Mario Schmidt at the Annual General Meeting (AGM) (Fig – 8) of the organisation in June 2014 in Bhiwadi, Rajasthan. This internationally-renowned Windows and Upvc Door Manufacturer has its focus on scaling greater heights in the country, riding on the back of adept manpower and quality. “We are here to sell much more than just Windows, perhaps relationships that last forever,” he added. Unveiling the roadmap for the future to its staff, suppliers, dealers and associates from across the country at the AGM, Lingel’s General Manager Anil Singhal said the company’s target is to ramp up its production from the current 1000 units per week to a strong 2000 units per week by 2015.

Lingel introduced a new phenomenon Lingel Suitcase at the AGM 2014 for its dealers, suppliers and associates. It basically contains casement corner samples, sliding sections and colour samples, and is great in terms of portability and ease of operation. Lingel is the first in the uPVC industry to come up with this unique accessory.

SOME WORDS OF TRUST – SUPPLIERS WHO SWEAR BY LINGEL

“We have been associated with Lingel for 6 months now. From our experience during this short duration, we are certain that in India, it is the number one company for uPVC Doors and Windows, primarily because of their superior quality and services. We look forward to working with Lingel forever.”

“Lingel, being a German company, brings with it the trademark German quality in India. They are always looking to upgrade their product based on India’s climatic diversity, which makes Lingel all the more safe and authentic. I feel Lingel has been successful in catching the imagination of the Indian customer, at least in the premium segment.”

Suggested Read: What is a Window Pane – Meaning & Designs

“Lingel is to Doors and Windows, what Mercedes is to cars. We didn’t have to think twice before associating with a world-renowned company, known for German-made, high quality and defect-free doors and windows. I am sure that will be the case with customers too.”

“We were looking for a leader in uPVC windows dealers, and who better than Lingel, who is hailed and respected the world over for their quality and after-sales service.”

“The significant thing about Lingel, apart from their quality, trust and service, is that they are very closely associated with uPVC Window & Door Manufacturers Association (UWDMA) in promoting and spreading awareness about uPVC Doors and Windows amongst customers as well as manufacturers. Lingel also works actively in assisting the efforts to introduce much-needed standards and specifications in uPVC.”

One of the milestone projects for Lingel is building India’s first glasshouse near Nainital. Lingel offers a 5-year operational guarantee on its hardware, which is again a first for the industry. The business model at Lingel is a 360-degree wheel of success; only 100% turnkey solutions result in maximum customer satisfaction and build trust in our products. Lingel provides free professional consultation, free project planning and design consultations. They also have specialized site inspections and site supervision free of charge. They offer maintenance servicing and replacement of spare parts is guaranteed.

Lingel, along with Dimex creates a wide range of unique products with unmatched designs. For sliding systems, they provide you with the choice of 1-5 track systems and a glass thickness of up to 24mm. The casement door or windows systems are able to carry the weight of each panel up to 120kg and a maximum glass thickness of 36mm. All the profiles have 2.5mm of outer good thickness, whereas competitors are working with 1.8 to 2mm thick sections.

Lingel has the highest industry testing standard called the “Weathering test” in India which runs for 8,000 hours with special xenon light, which is the highest testing time in the industry. This effectively means that Lingel profiles can last for 25 years without colour fading. Further, Lingel believes the opinion that a Window is only as good as the performance of the hardware. Therefore, it’s absolutely necessary to focus on the hardware as a key component for a successful Window.

With able guidance, firm dedication and pure diligence, Lingel has a long way to go!