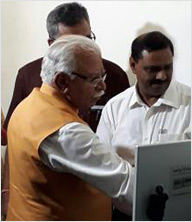 Hon’ble Chief Minister, Haryana, Shri Manohar lal Khattar, has become the first Chief Minister of any state in India to acknowledge the Earthquake Onsite Early Warning and Security System installed at HIPA, Gurugram on the occasion of Independence Day on 15th August 2017 at Gurugram. he triggered the test alarm at HIPA’s premises.

Taking into consideration the after effects of unexpected and high intensity in places like Bhuj and Latur, this earthquake onsite early warning system can be a huge help in prevention of any human casualties and revenue losses. This German technology was identified by the Department of Revenue & Disaster Management, Haryana and is now being taken up by a number of south Asian countries who have been susceptible to a large number of devastating earthquakes.

This technology has been developed with the cooperation of GFZ GEO Research Center, Potsdam, Germany and been tested successfully internationally by GEZ itself; Sheriff University, Tehran, Iran; TUV Engineering industry, Germany and National Observatory of Athens, Greece. It has been installed, presently, in more than 26 countries worldwide.

The function of the system is to detect the primary waves of an earthquake and calculate its intensity after which its programming helps it to shut off gas supply, power supply and switch on power back, water supply, stopping the elevators at the safest positions, open emergency gates and ring an alarm in case an earthquake of more than 5 intensity hits the location. The company claims it to be the only system which can be connected to the building management system in the entire world.