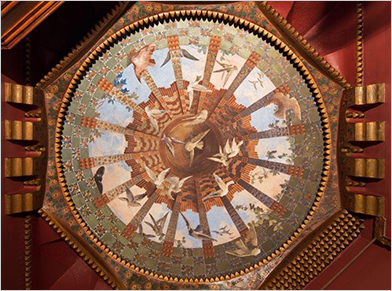 Following a major restoration, Antoni Gaudi’s first completed house will open its doors for public viewing in autumn of this year. The client, Manel Vicens i Montaner, a real estate broker, had commissioned Gaudi to build a summer home for him which took the architect two years to complete (1883-1885).

Used as a residency for almost a century, Casa Vicens was Gaudi’s first project in Barcelona. The house is a fine example of his eclectic style combining art nouveau with gothic forms, producing a completely new building style, something not witnessed in the region before. The architect also made use of the traditional Catalan construction while amalgamating decoration and symbolism. The talks for the restoration had been ongoing since April 2015 but only started in September 2016. The house will now open up as a museum. It is one of his eight buildings listed in the UNESCO’s World Heritage Sites.