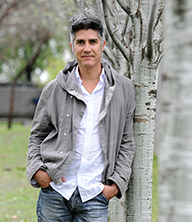 Alejandro Aravena of Chile has been selected as the 2016 Pritzker Architecture Prize Laureate. The 48-year-old Aravena is an architect based in Santiago, Chile. He becomes the 41st laureate of the Pritzker Prize, the first Pritzker Laureate from Chile, and the fourth from Latin America.

Since 2001, Aravena has been executive director of the Santiago-based ELEMENTAL, a design firm focusing on projects of public interest and social impact, including housing, public space, infrastructure, and transportation. ELEMENTAL has designed more than 2,500 units of low-cost social housing. Alejandro Aravena has pioneered a collaborative practice that produces powerful works of architecture and also addresses key challenges of the 21st century. His built work shows how architecture at its best can improve people’s lives.

Aravena has completed remarkable buildings at the Universidad Católica de Chile in Santiago. In the United States, Aravena has built St. Edward’s University Dorms (2008) in Austin, Texas. Currently under construction in Shanghai, China, is an office building for healthcare company Novartis, with office spaces designed to accommodate different modes of work — individual, collective, formal and informal

Alejandro Aravena is the Director of the Venice Architecture Biennale 2016, titled “Reporting from the Front,” set to open in May 2016. The formal award ceremony for what has come to be known internationally as architecture’s highest honour will be at United Nations Headquarters in New York on April 4, 2016.