Supporting the Prime Minister Narendra Modi’s mission to recast India’s urban landscape and develop 100 smart cities across the country, the 2nd Smart Cities India 2016 Conclave was conducted in New Delhi from May 11 – 13. At the event, the Bhendi Bazaar Upliftment project was honoured with the prestigious ‘Smart City Project 2016’ award by Dr. Sudhir Krishna, Former Secretary, Ministry of Urban Development, Government of India.

More than 22 smart city projects participated in the awards which were reviewed and evaluated by 7 prominent jury members who then shortlisted the top 4 nominations for the coveted Smart City Project Award. The Bhendi Bazaar project was declared the final winner amongst distinct shortlisted projects that include Gujarat International Finance Tec-City (GIFT City), DLF 5 in Gurgaon and Blue Ridge project in Pune.

Speaking at the award ceremony, Abbas Master, CEO, SBUT said, “We are extremely honoured and humbled for winning the Smart City Project award. Right from day one the project was conceptualized keeping tenants and their needs in mind. Therefore we would like to dedicate this award to the people of Bhendi Bazaar. Also we are thankful that the project has received unflinching support from the state and central government”.

The objective of the Smart Cities India Awards is to foster development of future cities that will enhance the quality of life, drive innovation and efficient management. The award to Saifee Burhani Upliftment Project, therefore, recognizes the ambitious vision of the late His Holiness Dr. Syedna Mohammed Burhanuddin to transform Bhendi Bazaar into the smart and sustainable city besides being favourable towards health and well-being of the people in all aspects – spiritual, intellectual, social and financial.

The Project has been highly praised by Prime Minister Narendra Modi and was also identified as the ‘National Best Practice Project’ at the launch of Smart Cities Mission last year. The Project is also been closely monitored by Chief Minister of Maharashtra Devendra Fadnavis in his War Room. The ambitious upliftment project covering 16.5 acres of land has more than 250 decrepit buildings, 3200 families and 1250 shops. All of these will be incorporated into a state-of-the-art sustainable development plan with 17 new buildings, wide roads, modern infrastructure, more open spaces and highly visible commercial areas. The creation of smart infrastructure and availability of technology at their disposal will infuse growth and open new avenues for the businesses in the area.

Saifee Burhani Upliftment Trust (SBUT) is a not-for-profit Trust that was set up in 2009 to undertake the redevelopment of one of India’s most vibrant but congested localities, Bhendi Bazaar, in Mumbai. The project was envisioned by the 52nd Dai Al-Mutlaq, the late Dr. Syedna Mohammed Burhanuddin (RA) and is now carried ahead under the revered guidance of his son and successor, the 53rd Dai Al-Mutlaq, His Holiness Dr. Syedna Mufaddal Saifuddin (TUS).

The Saifee Burhani Upliftment Project is an undertaking of the SBUT. The redevelopment project initiated under Development Control Regulation (DCR) No. 33(9) will transform the crippling Bhendi Bazaar into a smart & sustainable & healthy neighbourhood which will infuse growth, attract new businesses & investment, increase employment and contribute to the overall socio-economic growth of the people.

The underlining objective of the project is to uplift the lives of all the people living in the Bhendi Bazaar area (both residential and commercial tenants) regardless of the caste, religion or sect they belong to. To that end, the Trust has provided one of the finest residential and commercial transit facilities with safe, secure and healthy living and working conditions fully managed & maintained by the Trust.

Master Planning of the area is done using ‘best principles’ of Urban Planning to create a development which serves as a model for the city and country at large. 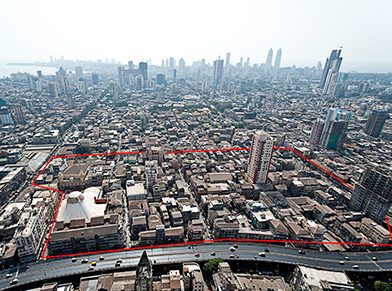 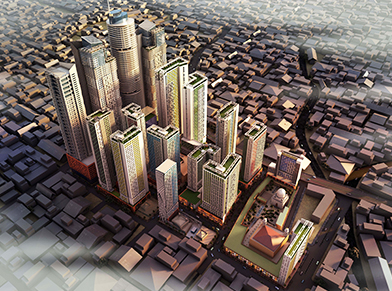