Innovative facade design has improved greatly in the recent past. However, facade design does not cater for active fie protection except for the recent inclusion of the automatic smoke vent for all glass buildings. Appropriate testing of facade materials and the fie stopping systems are critical to ensure adequate performance of the façade system of buildings in case of a fie. This article elucidates the parameters that define the performance of facade materials during fie, and various aspects which could prevent spread of fie in the building such as perimeter fie stopping and compartmentalisation of the structure. 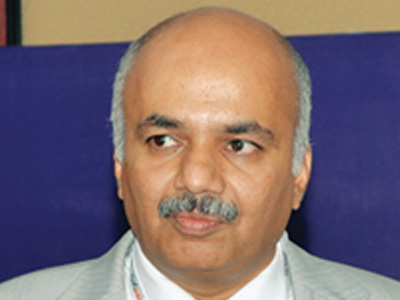 Lack of awareness of basic fie and safety aspects amongst citizens is an important factor, points out Santosh Warick, Director, Maharashtra Fire Services. Rapid urbanisation and industrialisation has created a challenge of fire and safety of high-rise buildings. One of the major causes of urban fies is the negligence of occupants toward fie safety norms and over-loading of electrical systems in buildings. 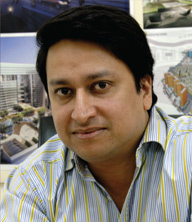 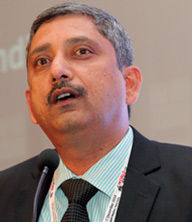 Façade is like a garment and should be designed according to the climatic condition and geographical elements. Regarding the fie safety of façades, we need to do a lot of research and testing, says Nagaraj Kollegal, Associate Vice President, Infrastructure, Infosys.

Façade materials play key role in fie safety, as it would be extremely difficult to control the building fie on the exterior. Hence, more focus is needed in selecting appropriate materials, and this requires designer knowledge on material behavior and performance, says Rajan Govind, Director, BES Consultants Pvt Ltd.

Suresh too points out the importance of selection of cladding materials at the design stage based on fie threat and combustion charachteristics of the material. Further, most procurements in façades are cost-based and not specifiation-centric, which exposes not only the buildings but also the surroundings to high risk.

The performance of cladding on external walls when exposed to fie is a serious factor when assessing the dangers associated with it, says Hatinder Vohra, National Head- Vetrotech India, Saint-Gobain India Private Ltd- Vetrotech Business. Fire from lower storey can propagate to higher storeys through the external cladding material. Such materials used for external cladding should have been tested for its combustibility.

Of late, many high-rise buildings in metros have started insisting on fie retardant materials for façades, says Somasundaram. “However, there is lot of ambiguity in choosing the right materials due to consideration of inappropriate/inadequate information during procurement. There is signifiant shift from conventional materials to fie retardant (FR) materials. The next step is to move towards non-sealant systems like open Joint systems etc.”, he adds. 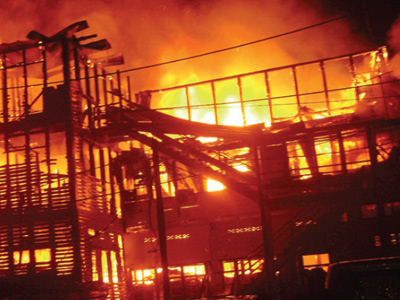 Façade Materials and Their Reaction to Fire Majority of human loss in case of fie accident in a building is due to smoke and toxicity as a result of the fie. ‘Reaction-to-fie’ of façade materials is very important to contain the propagation of fie and to carry out rescue operations. Combustibility, ignitability, flame spread and burning droplets are the important parameters to consider while addressing fie propagation aspects. However, smoke development and toxicity are the key parameters for the safety of occupants and for rescue operations by fie brigade.

The parameters which defie performance of a fie retardant cladding solution are:

The integrated approach of using fie resistant glass, following installation parameters and providing openings in the glass façade are helpful for carrying out external firefighting and rescue operations. All these aspects should be viewed in planning stage of building, says Warick.

According to Warick, the concept of compartmentation with glass partitions is not popular in India since the cost of fie rated glass is very high. The Glass that is normally used for separating cabins and discussion rooms in offices and information & technology buildings, are not fie-rated glasses. They can pose danger of spreading fie on the floor.

If building with glass façade is on fie, non-fie resistant glass starts heating and when sprinklers get activated these glasses crack. Cracking of glass may lead to spread of fie horizontally and vertically in the building. Splinters of broken glass may fall from the building and pose a threat to occupants and firefighters. A holistic view of various aspects of glass façade should be considered at the design stage of a building.

In the recent past, we have evolved with the concept of breakable glass to ensure that the firefighter can rescue people by locating a red triangle on the glass, denotes Suresh.

Fire-stop acts like physical barriers, which by design prevent the spread of flames, deadly gases and toxic smoke through openings in buildings. The whole idea of a fie stop is to ensure that fie does not travel vertically to upper floors of a building through the gaps between the façades and the floor slabs, elaborates Hatinder Vohra from Saint-Gobain.

Selection of right fire retardant materials while designing façade for any building is the key to address ‘reaction-to-fire’. This will also address the issue of flame spread. However, Perimeter Fire stopping is also a critical aspect in façade design to address flame spread. With the combination of these two – firstly right selection of façade materials and secondly, perimeter Fire stopping – major damage in case of fire can be avoided. Another key factor is compartmentalization or localisation of the fire. 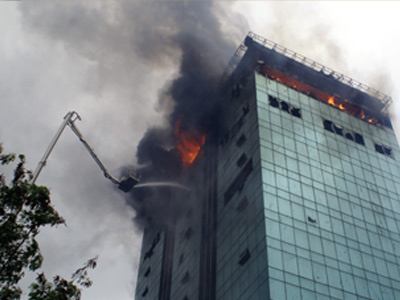 Fire-fighting in high-rise buildings – a challenge(1) 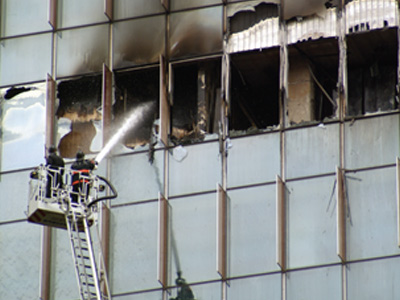 Fire-fighting in high-rise buildings – a challenge(2)

The need for laminated glass is felt only in specific locations such as hand rails, balcony railings , glass doors, structural glazing at lower height such as podium & lobby entrances.

How does an interlayered toughened fire glass work? Why is it important?

An interlayered fire rated glass comprises of two or more layers of glass (toughened) with a special intumescent material filled between them. This intumescent material foams up on exposure to fire. As a result, it expands on the surface of glass and does not allow the heat to pass from the fire side to the non-fire side.

Interlayered fire glass can provide protection from radiant heat thereby protecting all the combustible items on the non-fire side from getting ignited on their own. Upon increasing the number of interlayers it can provide complete thermal insulation from heat in addition to integrity of the system. Therefore using interlayered glass is the best bet to ensure radiant heat resistance (EW rating) and thermal insulation (EI rating) upon occurrence of fire. 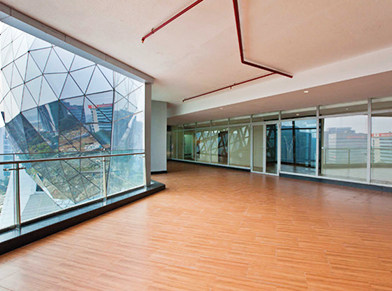 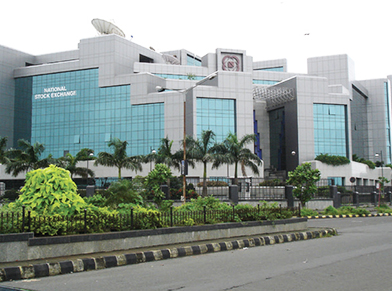 What are the standards used for grading fire resistant glass?

Based on the fire rating characteristic of a glazed surface, fire rated glass is categorized into three different types namely,

There are standards pertaining to testing of fire rated glass. Each nation has its own code or standards according to which it is tested. But the most widely followed standard worldwide are the European and the American Standards (namely EN & UL). The following are the most commonly adopted testing standards for glazed systems:

In India, the British Standards are commonly followed. The test standard BS 476 has been prepared under the direction of the Fire Standards Committee, and describes the procedures for determining the fire resistance of elements of building construction.

In buildings, the space between the floor and the façades are sealed to prevent the spread of fire. This is called perimeter fire stopping. It should have a fire rating at least as much as the slab it abuts. The fire stop and the façade must act as an integrated system upon the occurrence of fire. This is very important to prevent spreading of flames from one compartment to another.

ery important to understand the difference between ‘Fire Resistance’ and ‘Reaction-to-Fire’. Even a normal paper is fire rated, but up to what level? Will this be acceptable? Answer is NO.

‘Reaction-to-Fire’ is more relevant to materials. It deals with combustibility, ignitability, flame spread, smoke development, burning droplets & toxicity. Since we are discussing about ACP, which is façade material, ‘Reaction-to- Fire’ is appropriate term for selection of ACP and not fire resistance. Fire resistance deals with compartmentalization abilities of building systems like walls, doors, ceiling etc.

– Ideally recommended mix and density of non-combustible content in the core is 70 per cent
– Core must be self-extinguishing so that if the source of fire is put off then the core should not be a medium for propagation of fire Understanding the Performance Criteria of ACP with various test methodologies:

Therefore, an ideal fire retardant ACP must pass EN 13501-1 along with either NFPA 285 or BS 8414-1. Apart from the above, ACP with non-combustible core (mineral filler of more than 90%) is also available which can be considered for very tall buildings / places with very high human density. This product conforms to A2 as per EN 1305-1.

In either of the above-mentioned ACP, a third party certification like ‘Class 1A’ from an agency of repute for the manufacturer of ACP would provide required assurance. Certification process of ‘Class 1A’ is:

It is advisable to use ACP cladding without sealants.

Perimeter fire stopping is one of key requirements, which will prevent fire/smoke spreading vertically from one floor to another floor in case of façades are continuous between floors. Overall integrity of the façade system at the floor level is critical to achieve fire resistance, explains Rajan Govind. Spreading of fire on tall buildings is controlled at the building envelope level. There are proven and time-tested details as per good practises to be followed with use of appropriate interfacing materials. Any compromise on materials, specification, detailing at this interface would have adverse impact on fire performances. 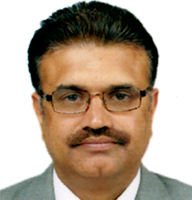 According to Suresh from Axis Façade, most failures in façades are due to incorrect application of the fire stop or ignoring the fact that the fire could possibly travel to other floors. “International codes have clearly defined the process and the application, but in India unfortunately we have not been able to regulate the code and ensure the correct application of the product. All fire stop systems need to be in accordance with BS476 Part 20, EN 1366 Part 4 and EN 1364 Part 4”, says Suresh. 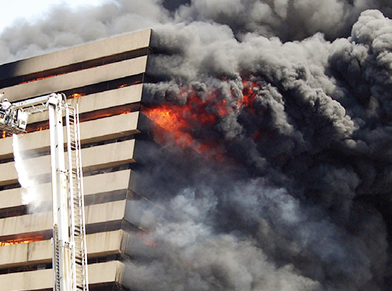 Compartmentalization is very important to limit the spread of flame by the use of physical barriers, says Vohra from Saint Gobain. These barriers could be walls, partitions and floors. It is to ensure there is no possibility for the flame to spread. The structure used for compartmentalization should not collapse under fire. It should not transmit heat from the non-fire side to the fireside as it could set all combustible items on the cold side on fire. Therefore, integrity and the insulation performance of the structure are very important when it comes to compartmentalization.