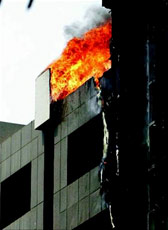 A major fire broke out in a six-storey commercial building in Kalina area of Santacruz on Friday afternoon. No casualties or injuries were reported. The incident occurred around 1:30 pm at the Diamond Square near Kalina University.

The fire started from the left wing and completely destroyed the left facade of the building.

“It seems that the fire might have been caused by a short circuit from the electrical installations on the first and second floor,” said Chief Fire Officer Uday Tatkare. “The building did not have any fire-fighting system,” say officials. “There was no fire detection equipment in the building.”

“According to the Maharashtra Fire Prevention and Life Safety Measures Act 2006, new buildings that are above 15 meter should have a well-equipped fire safety system based on the height of the building, occupancy of the building and the fire hazards. This building is around 22 meter tall,” said a fire official. The new law does not specify how the old buildings should equip themselves with fire-fighting systems, he said.

A major fire broke on the 12th floor of the First International Financial Centre (FIFC) building at Bandra-Kurla Complex (BKC) at 10.32am on Friday. The fire raged on for over two hours, before the fire brigade could extinguish it.

The FIFC building was reportedly newly constructed and the offices were not in operation. As soon as the fire broke out, 8-10 laborers who were in the building ran down. No injuries were reported. The police cordoned off the area and declared it a ‘no man’s land’, as the fire brigade’s dousing operations began.

However, for over half-an-hour, the fire brigade found it difficult to deal with the blaze as the hydraulic ladders didn’t reach up to the 12th floor. The blaze had even reached parts of the 13th floor.

Chandrakant Bhonsle, senior inspector of police, BKC, said that work on the interiors was going on in the 12th floor. “But at the time of fire, it was unoccupied. Prima facie, the cause of fire is due to a short-circuiting in the AC plant,” said Bhonsle.

“Three hydraulic ladders of different sizes were brought on the spot and additional pipes had to be attached from neighboring buildings,” said Bhonsle. 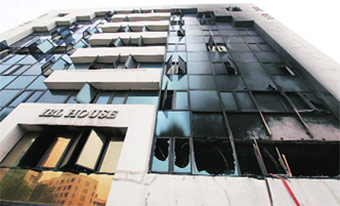 Four people were killed and seven injured in a major fire at a seven-storey building in MIDC, Andheri (East), around 11.15 pm Thursday.

Fire officers said the building violated several safety norms. They said its riser system was not working which delayed firefighting efforts.”The building does not even have an additional fire exit or an extra staircase,” said a fire officer. More than 50 people found themselves trapped as entry and exit to the bank is restricted by an automatic access card system.

“Employees tried to rush out but could not as the doors needed swipe cards to open. By the time the fire brigade reached, the employees were trying to jump out of windows.” The fire broke out on the first floor of the building which houses the IndusInd Bank depository. “Trapped bank employees inhaled a lot of smoke as the building lacks ventilation,” said the fire officer.

The exit door of the building was shut when the fire broke out, so were most glass windows. “We rescued over 40 people using aerial ladders,” said the fire officer.

All of the fire accidents in these glass cladded buildings have two commonalities – very high response time to overcome the flames and the relative unpreparedness of both the occupants and the fire-authorities to deal with escape routes and save lives. Fortunately for FIFC, the building was completely unoccupied at the time of fire else the consequences for human safety could be fatally grave. The Diamond Square building did not have any fire-detection system to warn its occupants. The fire at IndusInd Bank regrettably resulted in loss of four precious lives. The increasing use of glass and aluminium as a building material for commercial and residential towers and the spate of fire-incidents in recent past has generated critical media coverage and placed spotlight on adequate fire-safety pre-requisites and norms in such constructions.

Use of glass in buildings is preferred for its transparency and relative ease in installation and maintenance. Perhaps no other building material offers as much design flexibility as modern glass systems. However, glass facades when constructed without adequate provisions to deal with fire can prove to be a death trap for its occupants. Further, recent architectural trends coupled with sophisticated product innovations increasingly point toward higher use of glass as a fire-rated material due to its transparence, low-maintenance and longevity.However conventional soda-lime silicate glass offers extremely poor fire-resistance capabilities and needs to be substituted with better performing compositions if is to be used in fire-resistant glazing.

Before we delve into the details of modern fire-rated systems and general fire-safety guidelines, it is important to understand the generic fire-prevention systems available today.

Fire-prevention systems can broadly be classified into two categories: Active Fire-Protection and Passive Fire-Protection (fig. 4). Any well-equipped fire-fighting network should be a synthesis of these two systems, both complementing each other to prevent loss of life and property. 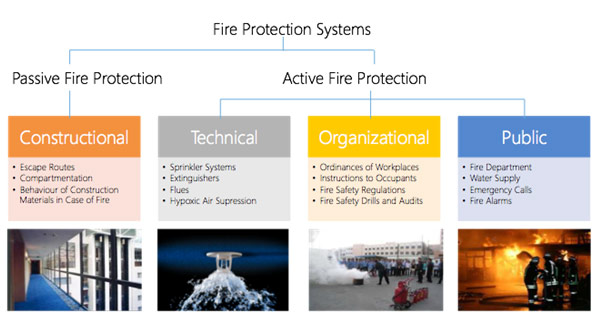 Or they can be manual –

These systems require periodic maintenance and audits to verify their work ability and response to fire. Juxtaposed to AFP systems are Passive Fire Protection (PFP) systems that create compartmentalization of the building floor plate through fire-resistive walls and floors. The purpose of these systems is to prevent the spread of fire by creating barriers to its passage for a specified duration, enabling occupants to assemble in a relatively safe compartment and eventually be pulled out to safety.

So where does glass fit? As mentioned, conventional soda-lime silicate glasses (with a coefficient of expansion of 9 x 10-6) do not offer much resistance when exposed to fire and shatter within minutes. Heat-treated glasses would last slightly longer but not significantly enough. Special glass types such as wired, borosilicate and intumescent inter-layered glasses are available that offer varying levels of protection when amalgamated with fire-resistant doors and framing systems. To understand the performance levels, the European standard (EN 13501-2) defines three classifications:

Apart from the above three EN classifications, The American UL (Underwriters Laboratory) standard has a further requirement that any fire-resistant glazing should have the ability to withstand the hose-stream test, which tests the assemblies’ ability to remain intact after a jet of water is blasted on its surface when exposure to fire. The test assesses hose stream impact, erosion and cooling effects in a consistent manner. It is not intended to replicate conditions that firefighters might create when attacking a fire.

These glass products span the range of standard test times of 15, 30, 60, 90, 120 and even 180 minutes. Some of these glasses can be tempered, laminated or insulated to satisfy safety and thermal insulation criteria.

The main factors that can affect the performance of fire-resistant glass with respect to its classification and test time are:

Fire-rated glass can be used as an effective passive-fire protection tool in the following applications:

Let’s rewind now to the fire-accidents mentioned above and analyze the reactions from the local municipal and fire-fighting agencies. The difficulty in attacking the fire on time and ensuring quick rescue operations stemmed due to five major reasons.

In response to these incidents, the Brihan Mumbai Municipal Corporation (BMC) in their press release proposed a blanket ban on fixed glass exteriors in buildings. This statement, though very extreme, needs to be implemented in sync with a plethora of changes to be incorporated in construction guidelines and in training and equipping the fire-fighting authorities.
The following proposals (some already implemented by the BMC) are specific to glass facades only and should be implemented in conjunction with existing building guidelines on fire-safety.

Responsibility of the Building Occupants

The above guidelines, if implemented unerringly and sincerely, can effectively provide fire-safe living spaces and in the untoward event of the building catching fire, emergency evacuation and fire-suppression can be effective and fast. All regulatory bodies should ensure that developers have comprehensively provided measures for fire safety and the mandated equipment list to stop the flow of fire within and between floors has been furnished, failing which the No Objection Certificate (NOC) should not be provided. Glass is an excellent choice of glazing, is eco-friendly with a very high recyclable content, completely immune to all environmental degradation effects and low on maintenance. Construction of glass facades should be regulated to provide comfortable, aesthetically brilliant and above all, safe living spaces. As long as the correct guidelines are formulated, implemented and sustained, glass will continue to be the material of choice for all modern facades and interior spaces.

Some architectural and energy requirements may exemplify the use of insulated glass units serving multiple functions in providing thermal insulation, aesthetic coherence with the facade and fire-resistant characteristics. It is possible to combine one of the above mentioned fire-resistant glass types as the inner lite of the IGU but the unit has to be tested for fire performance before conclusions can be drawn on its effectiveness and behavior when subjected to fire.

Some important considerations when using IGUs as a fire-resistant glazing are as follows:

In all cases, the manufacturer/supplier must be consulted for evidence in support of the fire-resistant glazing systems.

Fire-resistant glazing systems are most often used in a vertical orientation. However, there are some specialist approvals available for application in the sloped and horizontal orientations.

A number of manufacturers have tested and approved the available systems. Specific details must be obtained directly from the system manufacturer/supplier.

It must not be assumed that decorative effects can be applied to all types of fire-resistant glass without affecting its fire-resistance. Some types of glass may be decorated with surface treatments, e.g. sandblasting, and screen printing, without impairing their fire-resistance performance while others can’t.

In all cases, the specialist advice of the manufacturer/supplier must be obtained to ensure that the proposed treatment is appropriate and that relevant evidence of performance is available.

Other performance requirements may be readily integrated within the fire-resistant glazing system specification without compromising fire-resistance performance. This is an increasing requirement as buildings become more complex and the building environment more demanding. This can include a range of different functions vis-à-vis thermal insulation, safety and security including bullet and burglar resistance, decoration and privacy.

Because of their use in escape and access routes, impact safety and manifestation i.e. to minimize the risk of people inadvertently walking into a glass partition are particularly important additional performance requirements.