Restricting The Spread Of Fire And Smoke

Globally around 6 million people get seriously injured in fire accidents per annum, and over 500,000 die. Approximately 80 to 85% of deaths are mainly due to smoke inhalation, not by burns. The smoke kills faster than fire (flame or heat). Fire burns and smoke kills.Approximately 57% of people killed in fires are not in the room of the fire’s origin. (Source: NFPA Fire Protection Handbook) 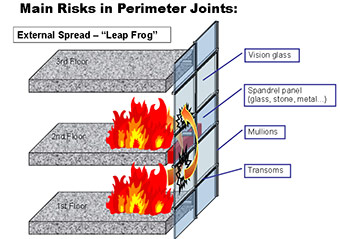 To reduce the risk to persons from fire, it is necessary to consider how to control or restrict the spread of fire and smoke horizontally and vertically. As said above the majority of people who die in fires are overcome by smoke. To evaluate the risk requires a basic appreciation of the way fires grow and how smoke can spread through a building. A fire in a building can generate smoke that is thick and black, carbon and ash dust particles in air, obscures vision, causes difficulty in breathing, and can block escape routes. Smoke is a serious threat to life which should not be underestimated.

Fire is spread by convection, conduction and radiation. Convection causes the major proportion of injuries and deaths. When fire starts in a building, the smoke rising from the fire becomes trapped within the volumes of floors, hit by the ceiling and then spreads in all directions to form an ever-deepening layer over the entire room space. The smoke will pass through any holes or gaps vertically and horizontally between the walls, ceiling and floor into other parts of the building. The heat from the fire gets trapped in the building and the temperature rises. Some materials, such as metal beams can absorb heat readily and transmit it to other rooms by conduction, where it can set fire to combustible items that are in contact with the heated material. Radiation transfers heat in the air in the same way that an electric bar heater heats a room. Combustible material close to a fire will absorb the heat until the item starts to smoulder and then burn within few minutes.

In order to prevent the spread of smoke and fire between the floors, between partition sand parts of the façade in building, FIRE and smoke separation has to be diligently planned designed tested and installed.

Fire Safety System in the Building

Following are the key points to be kept in mind while designing a fire safety system in the building:

Fire Stops and Smoke Seals play a crucial role in preventing the spread of fire and smoke and in turn help in minimizing fire damage and limiting the casualties.

Thus, going by the rule, safety should be the foremost concern in a building. There are several clauses in National Building Code 2005 that define codes to be followed in a building for fire safety. Some points relevant to façade industry have been listed below for the benefit of the readers.

2.21 Fire Stop — A fire resistant material having a rating of not less than the fire separating elements, should be installed in concealed spaces or between structural elements of a building to prevent the spread/propagation of fire and smoke through walls, ceilings and façade.

3.3.1 Type of Construction – For buildings which are 15 m in height or above, non-combustible materials should be used for construction and the internal walls of staircase enclosures should be of brick work or reinforced concrete or any other material with a minimum of 2 hours fire rating.

3.4.9 Fire Stop or Enclosure of Openings – Where openings are permitted, they shall not exceed three-fourths of the area of the wall in the case of an external wall. The openings shall be protected with fire resisting assemblies or enclosures having a fire resistance equal to that of the wall or floor in which these are situated. Such assemblies and enclosures shall also be capable of preventing the spread of smoke or fumes through them so as to facilitate the safe evacuation of building in case of a fire. 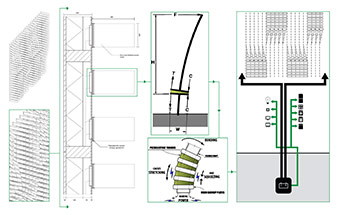 3.4.15.1Surface Finishes of walls including envelope – The use of combustible surface finishes on walls (including facade of the building) and ceilings affects the safety of the occupants. Such finishes tend to spread the fire and even though the structural elements may be adequately fire resistant, serious danger to life may result. It is, therefore, essential to have adequate precautions to minimize spread of flame on wall, facade of building and ceiling surfaces. The finishing materials used for various surfaces and decor shall be such that it shall not generate toxic smoke/fumes.

6.3.3.9 Use of Automatic Sprinklers – No building constructed in whole or in part should permit the confinement of inmates in cells or sleeping quarters, unless automatic sprinkler protection is provided.

As a conclusion it should be noted that fire rating has to be analyzed as an essential item of the facade specifications. It is essential that the design meets the standard compliance and performance criteria.