Ar.Santiago Calatrava announced as the recipient of 2015 European Prize for Architecture. 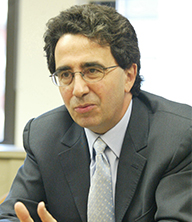 The Spain-born architect, Santiago, is more than just an architect, said Christian Narkiewicz-Laine, the President of the Chicago Athenaeum. “He is a visionary, theorist, philosopher, utopian and a true artist in the craft of engineering and architectonic expressionism. His buildings are not just ‘buildings’. They are powerful works of art, inspired by a master’s gifted hand and sculpted by a superior, critical eye immensely evocative and fiercely intellectual.”

In awarding the European Prize for Architecture to Santiago, both institutions have recognised his tremendous achievements over the course of his career, including the Stadelhofen railway station in Zurich, Switzerland, the Bac de Roda Bridge in Barcelona, Spain and the Peace Bridge in Calgary, Canada. The jury also recognised the many exhibitions in world-renowned institutions that have featured Santiago’s work, including the Hermitage Museum in St.Petersburg, Russia and the Museum of Modern Art in New York City, USA.

Santiago will receive the European Prize for Architecture at a ceremony at the World Trade Center in New York City later this month.