What is Curtain Hardware? 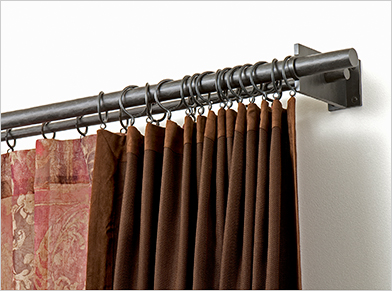 Brackets –
They are mounted on the walls or ceilings so as to suspend the curtain rods. They could be double brackets that can hold two curtain rods together.

Curtain Rod-
Curtain Rod or Traverse Rods are horizontal rods used to suspend curtains above windows or in shower areas.

Eyelet Ring-
They are circular rings having a loop. The curtain pins are suspended on the loops for the curtain to hang.

Finial-
They are a decorative finishing design element on both sides of the curtain rod which prevents the curtain rings from slipping.

Inside Mount Curtain Rods –
This type of hardware is used between two facing surfaces when a curtain has to cross along a horizontal span as in Shower areas.